I’m pumped about reaching my 4th state. Feels like I’ve finally proven myself to the world, passed some unspoken cross-country walker test of fortitude. Now people can stop wondering when I’m going to quit and start thinking “gee, she might make it.”

Over the Petersburg-Belpre bridge, I bid farewell to my mom and quickly learn an untoward truth about southeastern Ohio: it’s just as hilly as West Virginia. I thought once I tumbled through the “Mountain State” I’d be in the clear …. not so.

One joy of walking across America is wondering what roadkill you’ll pass next. I already have an owl and bear marked off my checklist. Though most sights aren’t that interesting, or that pretty. And they usually involve having to hold your breath as you pass.

Today, it’s two dead baby possums. I stare at them in an equal mix of morbid wonder and detached sadness. They have huge white heads, nearly the size of their body, and elfish ears.

Suddenly, I hear crying nearby. At first, I wonder if it’s the mother-possum trying to frighten me away, but then I spot the source of the commotion: two live baby possums!

I can’t bear to leave them. They’re good as dead, but I’d rather they die warm and quiet in each other’s company than cold & alone, shrieking in a way that makes my ears bleed. So I scoop them into my little blue hat and tuck that into my bra. Good to go.

I made the mistake of assuming all of Ohio would be this sprawling suburbia with towns every few miles. Instead, I’m met with rural countryside for days, with little to no service. There’s no wildlife rehabilitation centers within 90 miles, nor any pet stores nearby to buy puppy formula.

That night, the possum babies are still alive. This distresses me greatly-I thought they’d be dead within an hour or two of finding them. Well, no matter. They should pass by morning. Then I can continue walking without their presence plucking at my heartstrings.

Morning rolls around and they’re both still alive. I’m instantly miserable by the sight and can’t muster the resolve to get up for the day, even when the littler of the two possums finally passes. The stifling heat inside my tent forces me to bury him sooner rather than later.

The other one just won’t die.

I mash up a banana and feed it to her, all the while feeling guilty for not being able to help her more. Seeing her in pain but being unable to save her is unbearable.

Around sunset, I hear something that makes my blood run cold: barking dogs, and gunshots. A hunting party. The absolute worst group of people to find me camped out in these unmarked woods… men. with guns. and dogs. Especially since said dogs will find me first, and they might not be the cuddly sort.

I sit in terror for two hours, listening, until the noise dies down long enough for me to assume they’ve gone.

I set the baby possum beside me to sleep, but in the middle of the night I wake up to her crying, cold to the touch, and snuggle her to my side in my sleeping bag.

The possum baby is still alive. I don’t understand how. It blows my mind. But I’m sick of staying put, and these woods aren’t safe anymore, so I stuff her back into my bra and we take off walking.

It’s a HOT May 2nd. With too many hills. After the 3rd or 4th, every subsequent hill gets the stink eye from me. I take possum-baby out periodically to feed her banana mush. Service is nil-severing any connection I once had with the outside world. Not that it matters much, as my phone is on its last charge. My spirits turn up for a second when I find a full, discarded bottle on the side of the road after running out of water, but the mindless, uphill walking and the dying baby possum in my bra quickly beats any sense of cheer out of me.

As I approach Chesterfield (civilization!), a Great Pyrenees runs at me, barking and growling. I tense-it’s a big dog. We call them “polar bears” back home. I spot its owner standing in a nearby field and figure any second he’ll call his dog off, but instead he ignores us!

I shout out “HEEEYYYY! COME GET YOUR DOG!!!” while clutching my pepper spray in hand, just in case.

That gets his attention. He runs over, screaming “COME, CHUMLEY, CCOOOMMMEEEE!” for five minutes straight as Chumley,  ever the rogue, continues to follow me down the road. He obnoxiously darts towards me, snapping his teeth, as if to bite, before backing away. Again and again, as if his owner weren’t there, pretending to do something.

A neighbor’s dog finally draws Chumley’s attention away from me, and I escape unscathed. A few minutes later, I see a man walking down his driveway and assume he’s just going to check his mail.

Instead, he calls out to me “Are you on the trail?” Hardly anyone knows of the American Discovery Trail. Even fewer refer to it casually as ‘the trail.’

The Hills’, a family of four, are Jehovah’s Witnesses and the most wonderful Trail Angels. Ironically, Mr. Hill first learned of the ADT when he saw a couple walking by and thought to give them a ride ahead because “there used to be two crazy Rottweilers that lived up the road.”

I quickly break the news about the baby possum in my bra. (Probably wasn’t the best move to start my announcement with, “Ugh, I have something I need to tell you guys …” Cue all their eyes widening in a “oh gosh what is this stranger we just welcomed into our home about to say??”  sort of way. 😛 )

Thankfully, they don’t mind the baby possum one bit. After having breakfast the next morning at Mrs. Hill’s mother’s house, they even offer to drive me to Dollar General to buy supplies for a makeshift formula! And they give the baby possum a name: Penelope. (One of the most popular baby names in Chesterfield right now.) Penny for short.

Penny the Possum has a nice ring to it.

I manage to find a local woman who has experience raising orphaned wildlife to take Penny. At this rate, after going 3½ days without formula, she’s unlikely to survive. But it takes the burden of trying to care for her- and to see her die- off my conscience. Which is a great relief to me & my weary heart.

I hesitate before handing Penny over in my little blue hat. (If you’ve ever met me during my walk across America, you’ve seen me in a hat. Whether it be my floppy gray sunhat, or my blue winter hat. They are not for anesthetics. My hair is a greasy mop without daily showers, and I can’t stand it. The look and the feel of it drives me insane, so I wear a hat to keep my discomfort at bay.) But Penny’s grown awfully fond of my little blue hat, so it’s hers.

The rest of my stay with the Hill’s is amazing. They’ve given me full reign of an RV on their property to sleep in! Mr. Hill also changes Faith’s bearings so she won’t creak anymore, and I learn one of their teenage daughters loves YA books, giving us something to dish about over homemade pizza and drinks. It’s wonderful to learn more about being a Jehovah’s Witness from them, too.

Thank you for your unbelievable hospitality, Hills’! ❤️ 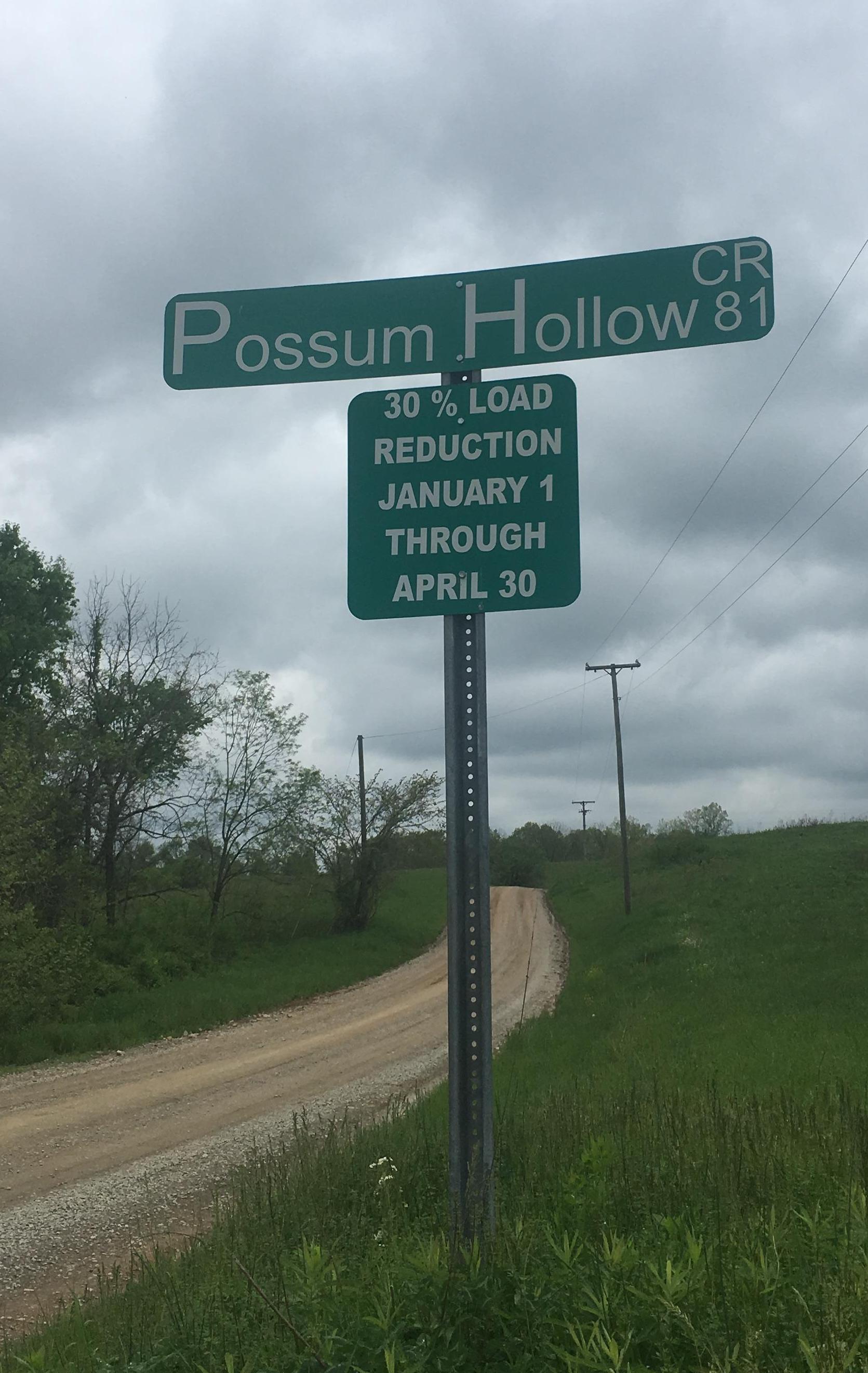 On my way out of Chesterfield, OH, the next mornin’, I pass by a “Possum Hollow.”

A car sits at the end of a driveway up ahead. I don’t like the look of it.

I like it even less when the car backs up a few feet, partly concealing itself behind some bushes, then stops again. I get the feeling the driver is waiting for me.

I switch to the opposite side of the street to put more distance between us as I pass. Right on cue, the driver side window rolls down. It’s exactly the sort of face I expected: that of a single, creepy old man. “Where you going?”

And of course those are the first words out of his mouth. (Sigh.)

I explain how I’m walking across America, and he laughs. Not kindly.

Our conversation is short, curt, but I remember thinking if he got out of his car, I’d take off running.

Being in Wayne National Forest is a harsh reminder that just because Google Maps labels all national forest land as green (aka the color often designated to public lands on their site), a lot of national forests’ are really private property. Something my stupid arse didn’t realize till I hit Dolly Sods in WV.

Jumping from Burr Oak State Park to the ghost town of Glouster to the start of the Buckeye Trail at Murray City is a breeze. So much so that it’d be pointless to bore you with the details!

Perhaps the only interesting part of that stretch is when I pass by a church called ‘Cornerstone Harvest’ that looks like a drug front. 😛

Well, that and the time I pass by an alpaca farm. 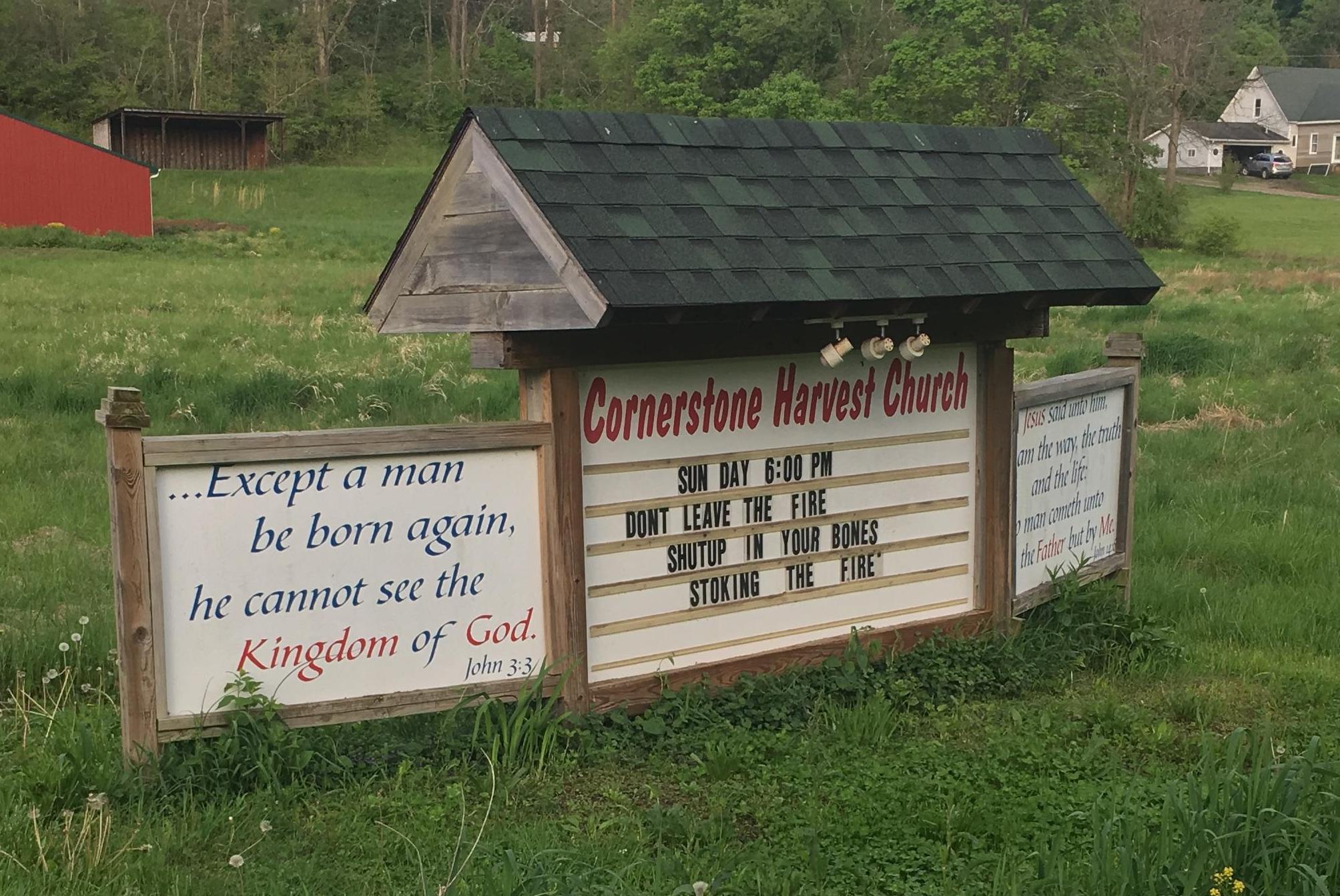 (Old, decrepit brick building. ✓ ALL dodgy cars in the parking lot. ✓ A huge shed. ✓ A billboard that reads “‘Don’t leave the fire | Shut up in your bones | Stoking the fire’ ✓ )